Home / Blog / From UDK to Unreal Engine 4: Rocks for Tools

As an indie developer, getting skeletal warriors to bash barbarian warrior heads in isn’t easy. Let alone getting bleeding, ethereal, flaming-skull skeleton warriors intelligent and dynamic enough to provide a fun challenge. With Unreal Development Kit, or UDK for short, it was downright frustrating. UDK brought huge inconveniences with it that added unnecessary development time to what was already a tough job. Unfortunately for us studios not big enough to bleed money while we work on our passion in every spare moment we have, engines like UDK were the only thing available to us outside of creating a custom one and spending even more inordinate amounts of time.

However, thanks to the guiding hand of Epic Games, we have evolved.

Not knocking UDK. It was powerful, and still is. For those unable to pay the license fee for Unreal Engine 3, we got a free version which limited certain features, most notably source code, appropriately. It was a fair deal and it worked. It was great, and it’s still great. However, for all its power, it was still a limited version of UE3.

Looking back, I’m sometimes amazed at what we managed to accomplish within the constraints of UDK’s Unrealscript. At its core, it’s a first-person shooter engine. Seriously. You can polish it up all you want, bind it to third-person and add in close-combat, but it was never intended to be used for heavy action-oriented gameplay that doesn’t involve a gun.

Source Code was a Blessing

For Age of Blood, UDK proved to be a hassle to use but our best choice. With Unreal Engine 4, I feel like I’m not using a rock to slam in a nail but a true-to-life hammer. C++ source code scripting removed all the limitations of UDK. No more having all weapons derived from guns, spells from bullets, and working out with the base code that more often impeded progress than aided it. Yes, kind of difficult to create a game with AAA influences while using a BBB engine.

Age of Blood was in development for over a year with little to show for it. Sure, we had stuff done. Nearly one complete level, two in-progress ones, and the basics of gameplay. That means combat, rudimentary UI, AI enemies we affectionately named “Derpy”, and simplistic puzzles. To give a sense of how UE4 has changed things up, we made the switch over to UE4 during the Rocket beta. In two weeks, we managed to not only recreate half of everything we already developed, but improve upon it. We’re now at the point where the game has become what we attempted with UDK. And yes, we now have bleeding, ethereal, flaming-skull skeleton warriors intelligent and dynamic enough to provide a fun challenge. 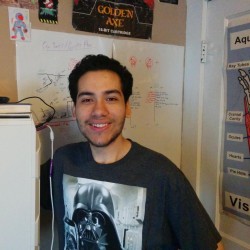